There is a worrying forecast within the aviation industry. The International Air Transport Association – also known as IATA – has predicted that in the next two decades the demand for air travel will increase by 100%. Simultaneously the number of pilots continues to drop. Since 1987 there has been a 30% decrease in pilot numbers. The navy and air force both expect shortages over the next years and when military pilots often become commercial pilots, the shortage will spill over into the commercial airline industry. The solution? Faster airlines that are able to get more passengers to destinations in quicker times.

We already knew that life was speeding up, but from 2019 it has got a whole lot faster. This is especially the case in the aviation industry where jetsetters want quicker travel times – and so do the airlines.

Ever since the days of the BAC Concorde which featured between 1976 and 2003, commercial airlines have been cautious about pushing the ceiling on the potential of supersonic aviation travel. The aforementioned French-British passenger turbojet boasted a slender frame and a drooping nose, all of which helping it doubling the speed of sound (Mach 2.04). For those unaware, that means it traveled over 2100 kms per hour or over 1350 miles per hour – at a cruising altitude.

British Airways and Air France decided to cancel their trailblazing project for a number of reasons. The plane’s design seemed to lack the potential for further innovation. It also had high running costs in terms of fuel and had limited seating (92 – 128 seats). All things that are understandably not appealing to airlines.

The BAC Concorde may have been retired but super-quick air travel has not. Today more innovations and developments have allowed the industry to start whispering about 19-hour trips from London to Perth and other speedy air journeys.

NASA and Developments in Tech

The Lockheed SR-71 Blackbird long-range reconnaissance aircraft, used by the United States Air Force between 1964 and 1998, is the jet with the fastest speed record at 3.3 Mach (2,200 mph). Until now that is. Researchers and manufacturers have learned from the Concorde and Tu-144 failures and are busy at work developing sustainable technology for supersonic aircraft.

Blowing the BAC Concorde’s record out of the sky, the Lockheed SR-71 recorded speeds above 2,200 mph and a Mach score of 3.3. However, this aircraft is only used by the USA Air Force and not used as a passenger plane.

One of the issues with these types of planes is their noise. They can become uncomfortably loud when reaching such speeds. This is what has prompted NASA’s Low Boom Flight Demonstrator Program. In partnership with Lockheed Martin, the X-59 QueSST has been developed. This technology is used to prevent dangerous levels of noise and sonic boom. It will allow commercial planes to travel at Mach 2.2 in near silence. Although this technology is not due to be tested until 2022 and probably won’t be ready for use for some time after that.

As things stand, the faster a plane travels the more fuel it uses. In 2018 the longest flight without stops was a 19-hour journey from Singapore to Newark. However, this has been equaled of late with a non-stop flight from the UK to Australia. For the Asia-American flight the non-stop flight was only made possible thanks to an extra 24,000 liters of fuel.

This comes in conflict with the aviation industry’s latest commitments in light of climate change. Ultimately airliners are trying to promise lower emissions to attract more environmental-conscious buyers. The IATA – who were mentioned earlier – has set a reduction scheme in place aiming to reduce emissions from 2020. The bottom line is that there is an issue with trying to fly faster but doing it in a way that does not cause more damage to the planet. This has sparked innovation and a way to seek alternative ways that sustainable fuels can be used to fly these fast aircraft.

Some of the Fastest Commercial Planes

While we wait for these sustainable fuels or other solutions, you can still take advantage of some pretty quick commercial airliners. Here are some of the fastest:

First on the scene in the middle of 1995, the Boeing 777 is a household name and a wide-bodied design and twin engines. It is American born and a favorite around the world, including with airlines such as United Airlines, British Airways, Emirates and many more. It has a maximum passenger capacity of just under 400 at 396 seats and easily completes long flights. It has a cruising speed of Mach 0.84.

The 777 is one of the most common and celebrated planes of the Boeing collection. It is even more common than their 747 model. The 777 was the first commercial plane to be designed by a computer using 3D CAD systems made by IBM. This was revolutionary because it changed the way aircraft were created since. 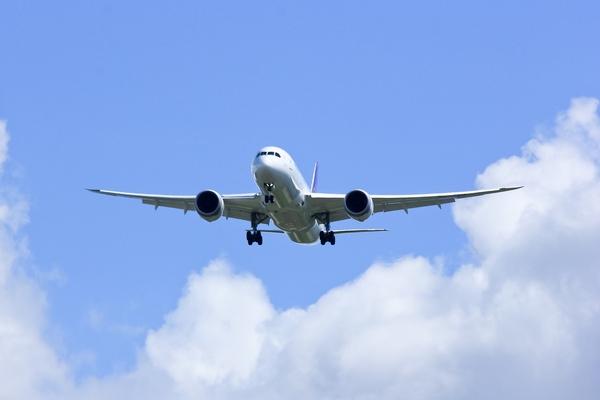 Boeing and Airbus draw the same-sized straw when it comes to designing the next fastest airliners, namely the Boeing 787 and the Airbus A380.

The 787 is a long-haul, mid-sized and twin-engine plane that fits a maximum of 335 passengers and boasts Mach 0.85 at its cruising speeds. One of the more appealing aspects of the 787 is that it is significantly more fuel-efficient than the 767, the model it was made to replace.

Another is the plane’s cabin windows which are the largest in service to date. These dimensions are 18.4 x 10.7 inches and are placed at a higher level to help passengers get a better view of the horizon. Boing has spent an estimated $32 billion on the development of its 787 since 2011, which has allowed it to retain a place among the best and fastest airliners in the world.

Boasting the exact same Mach is the wide-body, double-decked and quadruple-engine Airbus A380. These super large aircraft are the largest in the world and can hold 853 passengers in a single journey. Getting all these people to their destination at once is only made possible because of four engines and Rolls-Royce Trent 900 turbofans. These aircraft are used by many airlines but the ones with the most A380s within their fleet are Emirates, Lufthansa and Singapore Airlines. On the other hand, the 787 is more popular with Qatar Airlines, United Airlines and Japan Airlines.

The development fund of the Airbus A380 was increased to just under $20 billion due to challenges with the electrical wiring. Not only did these challenges increase costs, but they held back the aircraft for two years. 2014 saw the most orders for Airbus and the final Airbus is planned to be sold in 2021.

The Boeing 747-400 is a worthy runner-up to what will follow. This airliner has been manufactured with a number of structural and technological developments that have enabled it to remain safe and fast. Some of these improvements include wing tip extensions, a glass cockpit that seats two and six-foot winglets. Not to leave out increased fuel efficiency and revised wing fairings. The architecture of entertainment systems has also been completely enhanced so all 660 passengers can enjoy enjoyable flights in a single class.

The improved fuel efficiency of this airline has been a key talking point. This has only been made possible through its new engines, namely Rolls-Royce RB211-524G/H, General Electric CF6-80C2B1F and Pratt & Whitney PW4056. The 747-400 glides through the clouds are speeds much faster than many competitors reaching speeds of Mach 0.855. The 660-capacity aircraft was offered to the world in 1898 and is predominantly used by Qantas, British Airways and Lufthansa. It is used as a long-haul plane and can fly without stopping for over 7500 nautical miles.

Boeing triumphs when it comes to finding the true winner of the fastest commercial airliner. The wide-body Boeing 747-8i, sometimes referred to as the 747-8 Intercontinental, has refined wings, enhanced fuel consumption and new engines. It can hold 342 passengers, which does include eight spacious seats in first class and 92 more in business class. This commercial plane started flying in 2012 and since no plane has managed to outshine its Mach score of 0.86.

This model has been in fierce competition with the Airbus A380 featured above. Boeing also claims more than being a bit faster, their plane is 10% lighter in each seat and guzzles 11% less fuel per each passenger. This results in a 21% reduction and a seat-to-mile reduction in the region of 6%.

In 2017, the USA Air Force stated that the presidential current planes, Air Force One and Two – which are Boeing models as well – will be replaced with the Boeing 747-8. These planes were originally going to be sent to a Russian airline Transaero, who is now bankrupt. To bring them up to presidential standard and heighten security, these 747-8s will be reconfigured to some degree and kitted out with new equipment.

Boeing is not satisfied with already holding the title and want to create an even faster commercial plane that will significantly beat past records. This planned hypersonic jet is rumored to reach 3800 miles per hour – or Mach 5. To put this into perspective a flight from New York to London would take around two hours of your time, compared with the current flight time that is nearly touching seven hours.

Boeing’s Kevin Bowcutt, who occupies the position of hypersonic chief scientist, has stated in an interview that to be able to make same-day trips overseas easily, they will need to develop airlines that can achieve Mach 5.

Considering the many setbacks and delays that will undoubtedly materialize when trying to make this become a reality – most often to do with meeting industry and growing environmental regulations – Boeing is setting a deadline of the middle of the 21st century. Much sooner they may have developed a faster jet, but this will be for military use, estimated to be available in 2023.

Yet, the race for such impressive aircraft does not come without fierce competition. There are reports that The Chinese Academy of Sciences is in the process of making an aircraft that will also reach Mach 5 speeds, however, the plane will also be slightly unorthodox and have layers of wings. The plane is estimating flight times of two hours between New York and Beijing; a flight that currently takes around 13 hours to complete.

The realities of supersonic or hypersonic travel in the skies may not become mainstream for some years or decades. Until then the best way to travel fast is private jets which remove the waiting around as well as offer fast flight times. The fastest private jet in the world to date is the Cessna Citation X+. This private jet can compete with some of the fastest commercial planes in operation, partly due to similar technology and engines.